Moving To California - Is It Worth It?

Is it worth it to move to California? I'm in California now, ready to start my new job on Monday. Pretty excited about it. One of the things I struggled with was whether or not to leave Seattle and come back to California. I obviously made the decision to do it but how did I come to that conclusion? Is it really worth it?

I'm going to start with this one because taxes is one of my favorite topics. According to one survey, California and Washington state have a tax burden of 11.5% and 11.1% respectively. This is a virtual wash. However, they go about how they collect their taxes very differently. California income tax is pretty high reaching 9.3% at the top,They also have a pretty high sales tax which can reach upwards of 8.75%. California also has fuel tax ,property tax, and a cigarette tax.

Washington also has a pretty high tax burden, but structures it very differently. Washington has NO income tax. Seattle has a sales tax of 8.8% and a Restaurant tax of 9.3%. This is of course higher than in most places in CA. They too have a property tax, and derive 30% of all revenue this way. They have a fuel tax, but it is lower than California's. They too have a Cigarette tax which is MUCH higher than in California. I don't smoke, so this doesn't affect me.

In the end, most of the taxes are a wash. BUT the fact that I don't smoke, don't own property, I earn a high income, and I don't spend very much, Washington is the clear winner.I estimate that I probably pay about 5% more in total taxes in California than I do in Washington. Winner: Washington

I rent. So I'll start there.

This really depends on where you live in each area. So for sake of comparison I will use the two places I have lived, Pasadena and Redmond. Pasadena is much more "urban" which means that rents are going to be slightly more. When I left Redmond, they were about to raise the rent on my apartment to $1300 for a one bedroom apartment that was a little over 700 sq. feet. That was probably a little higher than the average, but it was close. So I would say market rate for this place was right around $1200. A similar place in Pasadena right now would probably be about $1400 right now. However, if you were to live in say Santa Clarita, a city closer to the type of town Redmond is, rents would probably be about the same.

Buying is a different matter. Despite the fact that housing prices are coming down in LA and are staying relatively flat in Seattle, buying a house is still more expensive in LA than it is in Seattle. I would estimate that buying in LA is still probably about 15-20% more expensive right now. But I expect this to correct itself in the coming year. Winner: Washington

As I type this, it is about 68 degrees in L.A right now and is very sunny. It is 43 degrees in Redmond and cloudy. I'm actually not a person who is affected that greatly by weather, but having left it and come back, I can say that it does make a difference in more ways than is obvious. First off, I don't have to plan around weather. In Seattle, I often have to change my plans or not make them at all because of the rain or cold. I have found myself reluctant to leave the house because it was so cold.

If you are a guy, a side benefit of the nice weather are the short skirts. I also contend, that the women are just better looking in CA than in other parts of the country. Sure, it may be fake, but what does it matter if you are only looking anyway :)

The one advantage Seattle has here is that it is not quite as hot in the Summer. There is a week where the heat might be really uncomfortable, where LA probably has about a month of that. But hey, isn't that why they invented Air Conditioning?

This is one thing money just can't buy. No matter how much money you throw at it, you aren't going to be able to make it sunny or warm outside. Winner: California, by a lot

I've already gone over housing, so I won't factor that in here. A common thing you hear about living in California is that your salary will be adjusted because of the higher cost of living. I can tell you right now it's a big lie. I am going to be making more money here than I was in Washington but that is because I'm taking a better job. I had similar offers and positions in Washington that I was considering, and I can tell you that the salaries can't adjust for the fact that it is just plain more expensive to live in CA than in WA.

At my last job in CA, my company was acquired by a company based in Ohio. I was talking to the head of the CA operations who had moved from OH and we were talking about salaries. I asked him if he was interested in moving more of the engineering jobs from CA to OH to save on the salaries. He let me know that he wasn't because, much to his surprise, the salaries weren't all that different. In the end, CA loses because it is more expensive to live here but you won't get compensated for it.

Other than that, goods cost the same. Food and other items are a push. Gas is slightly more expensive in CA by a couple of cents. Winner: Washington

If you are looking for a tech job, California wins here hands down. Seattle tech jobs are dominated by Microsoft and Amazon. Google is also starting to make strides in the area. But if you decide, like I did, that you don't want to work for one of these firms, you are going to be out of luck. You could take a tech job in a company like Boeing, Washington Mutual or Starbucks but if you are like me you want to work for a tech company, not do tech work at a company.

The Southern California job market is just much more diverse. No one employer dominates the area. This hold true outside the tech industry as well. If you are looking for jobs in Entertainment, defense, finance, bio-tech, or any number of other industries you will have better luck here. If you are like me, and your partner is not in the tech industry, this becomes a crucial fact because your partner has to be able to find a job too. Winner: California 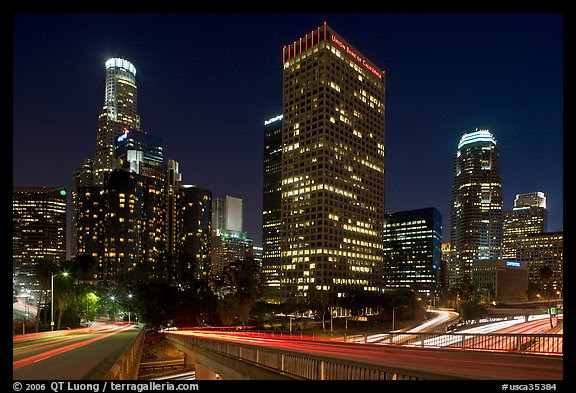 However much Seattlites like to complain about the traffic, California is worse. If you don't like traffic, if it grates on your nerves, then LA might not be the place for you. I try to live close to work to minimize this effect, but the fact remains. Traffic is a bitch in L.A. Winner: Washington

There can be many factors which way in on your decision to move. The above are mine. I also have family in the L.A. area which is a factor. I also grew up with the smog, so it doesn't bother me at all. I figure it is probably about 8%-10% more expensive to live in California than Seattle. If you make six-figures like I do, that can be more than $10,000. For that money, you get the nicer weather, more things to do, more job choices, and of course, the short skirts.